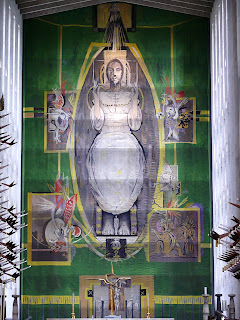 12 of us gathered in Coventry recently for the first Sodality of the Holy Spirit (SHS) Enquirer's Day. We came from nearly all corners of our islands to listen to each other, to listen to God and to begin to discern a vocation to the Sodality. It was a particular delight to see both lay and episcopally ordained represented on the day and to share it with our patron, Rt Rev’d Paul Bayes, the Bishop of Liverpool.

The day began with coffee. We then gathered around a table together for an opening prayer and Mthr Leah and Fr Simon introduced themselves and played out how wemight spend our time together.

Mthr Leah then explained one of the core practises of the Sodality - Winnowing - which is a two fold process of listening: firstly to Scripture using Lectio Divina (the opportunity to prayerfully listen deeply to a passage of scripture whilst being attentive to what God may be saying through it to us in our context); secondly to prayerfully listen to each other using a form of Appreciative Enquiry (each person being given a fixed period of time to bring an issue which is then shared and other members of the small group then can ask questions of clarification but be non-directive.)

Having listened to one of the Sodality’s core practises, we broke into small groups (ideally triplets) to try Winnowing out for ourselves. We allowed just over an hour for this, to allow the deep listening required to happen and for each triplet member to bring something to their group. We broke for coffee and then reflected back on how Winnowing felt. The general feeling was very positive. Some had used both Lectio Divina and/or Appreciative Enquiry in other contexts.

+Paul then shared with us why the church needed Sodalities, perhaps especially at the moment as we are called to burn brightly with the Light of Christ in a world that seems increasingly dark. We then broke to worship together and moved over to Coventry Cathedral where Mthr Kathryn Fleming presided at their midweek Mass which we had been invited to attend. It was deeply moving to worship at the feet of Graham Sutherland’s tapestry which fills the east end of the building.

After a lunch break, Mthr Leah and Fr Simon explained a little more about our call with Fr Eddie to form a Sodality. Sodality comes from the Latin root, Sodalis. This can be translated comrade or other words, all of which suggest closeness and active partnership: companion, associate, mate, crony, accomplice, conspirator, are all appropriate. It infers a committed and significant sense of belonging to one another around a shared task or purpose. It is the right term to describe the deep sense of calling to togetherness that the three founding members have felt to each other and the discerned charisms for renewing the local church which are about the church being:

The day closed with further discussions about ways forward for those gathered as Enquirers. It became abundantly clear that those present felt called to walking forward together, seeking the discernment and leading of God in their own involvement with the Sodality in the days, weeks and months ahead.

Popular posts from this blog

Bishop Paul Bayes to be Patron

By Fr. Eddie Green July 20, 2016
We are delighted that Bishop Paul Bayes, the Bishop of Liverpool has agreed to be Patron of the Sodality of the Holy Spirit. Bishop Paul writes: "The church needs resilient, well equipped disciples, alive to the will of God. I warmly endorse the SHS, as a group of people seeking to be a part of what God is doing to renew the Church." We look forward to welcoming Bishop Paul to part of our Enquirers Day on 26th November 2016
Read more

By Fr. Eddie Green September 28, 2016
The Sodality of the Holy Spirit is an inclusive community of individuals committed to developing the charisms (intentional, missional, expectational) in their own discipleship and ministry. For ordained and lay leaders, men and women. Rooted in the Church of England but open to all creedal Christians. Our first enquirer's day is at Coventry Cathedral on the 26th of November 2016. For part of the day we will be joined by our  Patron , Bishop Paul Bayes. The cost for the day is £12.50 via Eventbrite, this covers basic costs for the cathedral - a collection will be held on the day towards any further costs. Please email us at  contact@sodalityholyspirit.com  or use the contact form if you would like to join us. We will then send a link to the Eventbrite page. Our structure for the day 9:30 AM Arrive & Coffee 10:00 AM Welcome & Introductions 10:15 AM Winnowing 11:20 AM Coffee 11:30 AM Winnowing Reflections 12:00 PM Holy Communion 12:45 PM Bring a packed Lun
Read more

The Sodality of the Holy Spirit

An inclusive community of individuals committed to developing the charisms (intentional, missional, expectational) in their own discipleship and ministry.
For ordained and lay leaders, men and women. Rooted in the Church of England but open to all creedal Christians.
"The church needs resilient, well equipped disciples, alive to the will of God. I warmly endorse the SHS, as a group of people seeking to be a part of what God is doing to renew the Church."
Bishop Paul Bayes - Patron